Last week we were notified of the tragic death of one of our motorcycle members Martin Dixon. Martin was involved in a road traffic collision whilst riding for Bloodrun EVS operating in the Cleveland and North Yorkshire area, as a result of which he suffered injuries that proved fatal. To say we are devastated at this sad news is an understatement.

Firstly, our thoughts are with his wife Tina, son Martin and daughter Hannah as well as his wider family and our friends and colleagues at Bloodrun EVS. On behalf of us all at RoADAR Cleveland I would like to offer our deepest sympathy.

Martin joined the RoSPA group in 2012 in order to gain his advanced riding qualification specifically so he could ride for 'Bloodrun EVS'. He set his stall out to achieve the highest standard and obtained a RoSPA Gold Award. He has only recently requalified and maintained his Gold standard; the requirement with RoSPA is that members are re-examined every three years. His examiner wrote 'A nice ride and very deserving of the Gold standard that he has retained'.

Martin was 'Mr Nice Guy', sometimes very quiet but his enthusiasm for motorcycling and in particular the Bloodrun EVS organisation was obvious to all who knew him. The fact that he has been involved in this tragic incident whilst riding for Bloodrun EVS and the benefit of the wider community says everything about Martin's ethos.

Radios are being used more and more these days to communicate with an associate undergoing training. It is important that the tutor knows what to say and when to say it during the instruction to the associate. The radio training was given by two of the RoSPA examiners, and a great day was had by all learning how important it is to communication with the associate through radios during their training. 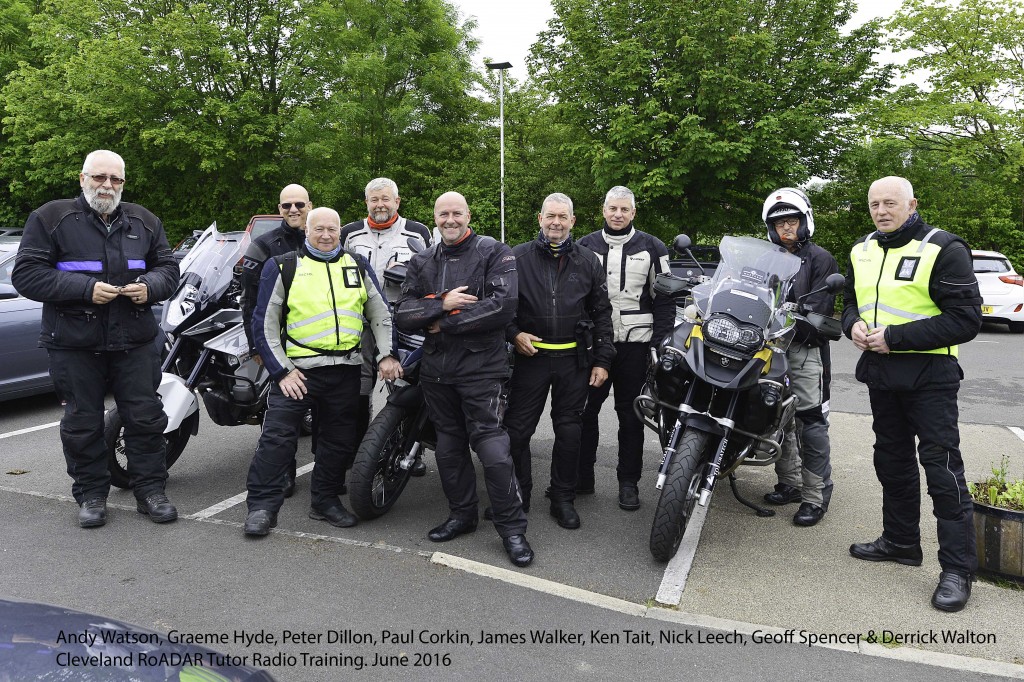 Photograph of the group's bike tutors undergoing radio training given by two of the RoSPA examiners:

The Great North Air Ambulance Service (GNAAS) benefits not only road users but all who need their expertise in an accident or emergency situation. They cover the North East, North Yorkshire and Cumbria 365 days of the year whether it's in a city, countryside or a remote mountain. With their three helicopters they are never more than a 15 minute flight away from a hospital.

Cleveland RoADAR is proud to have donated £250 to the GNAAS this year helping them to save lives.

We have 6 going down to the Riders Rest 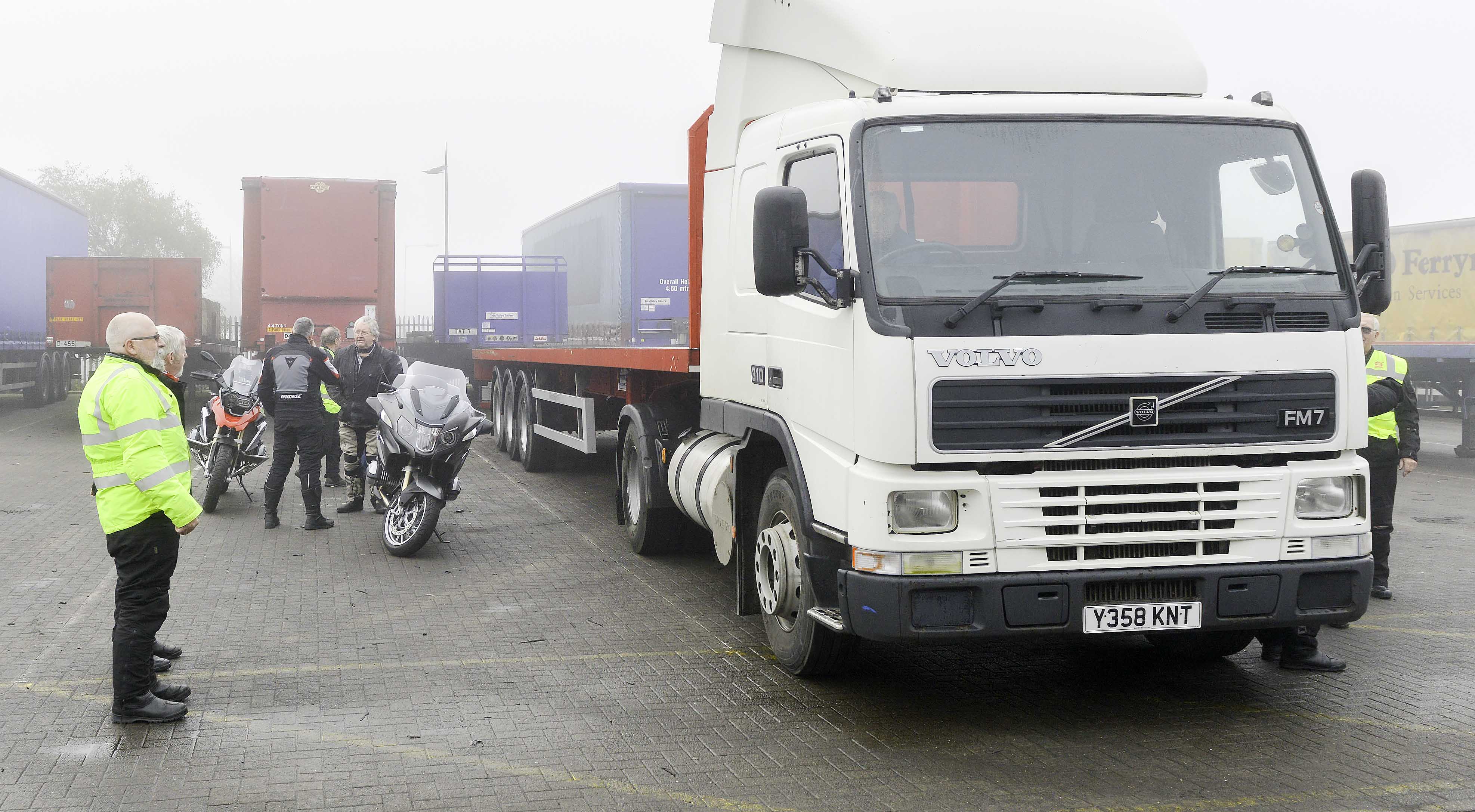 The group held a 'HGV drivers view of the world' event hosted by A.V.Dawson Haulage of Middlesbrough. 26 folk turned out on a misty day to experience what the view is like from the cab of a HGV. Motorbikes were positioned around a HGV to see where the blind spots are so as to give rides and drivers a better understanding of where they should position themselves so that a HGV driver can see them and be aware of where they are. 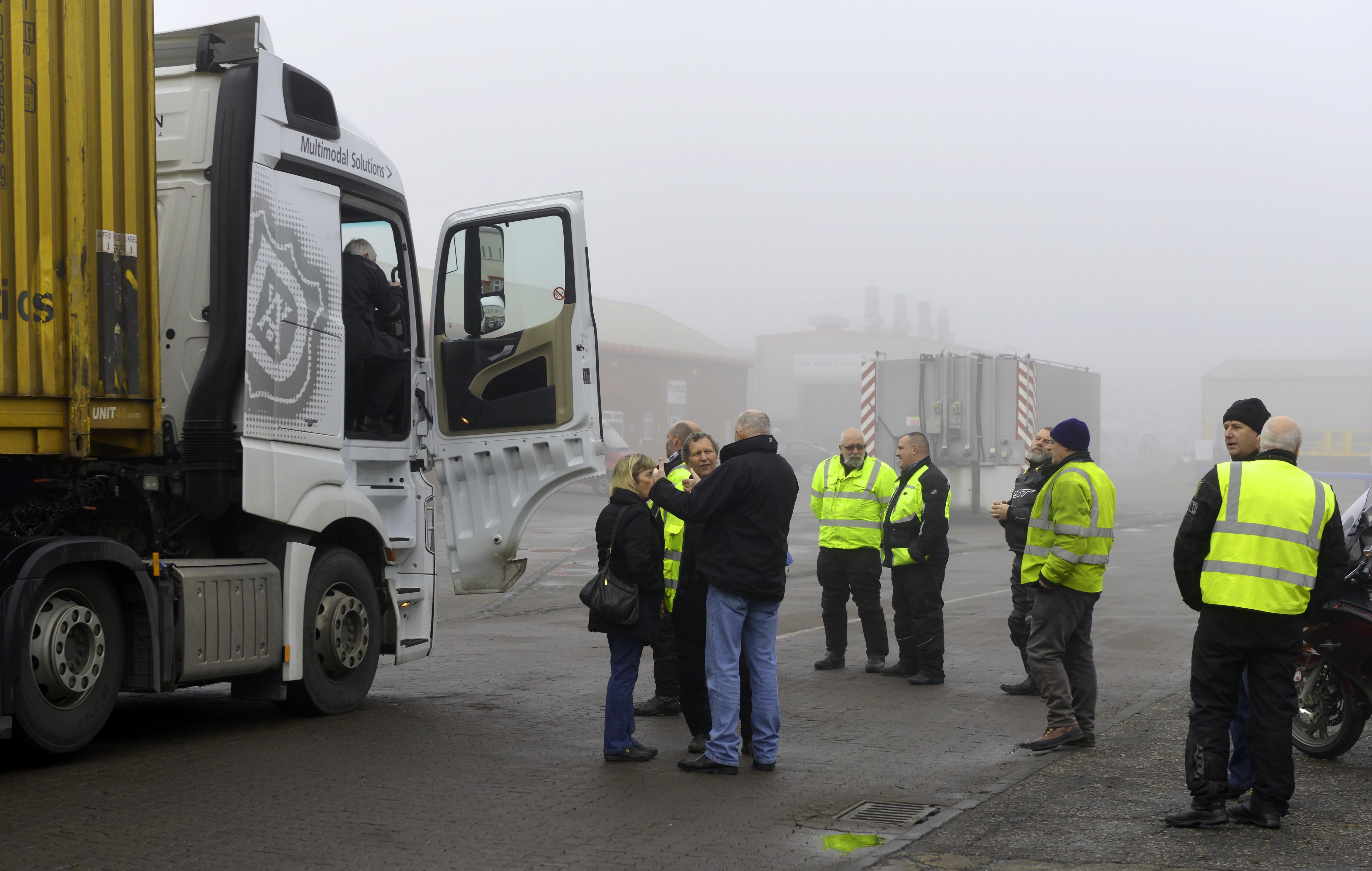 I believe that everyone present took something away with them that should make for safer riding and driving. Several folk had a drive of a HGV around Dawson's yard which by the way is huge and manage to cross another event off their bucket list. Many thanks go to A.V.Dawson and to Allan North who entertained us.

Anyone up for a bike trip to the Massif Central, staying at the Riders Rest??

Had a great ride out today with Durham IAM….some very twisty narrow little roads…some with there own little water ways…but all in all a good day….4 of our group join the ride

Knock, knock anyone there?….just found my way back on….will be posting ride out info over the next few weeks….

Observing when visibility is low.
Always be prepared for a sudden stop in the traffic ahead. Don't follow closely, and only overtake other traffic when you can see that it is absolutely safe to do so. This is seldom possible in fog on a two-way road. At junctions when visibility is low, wind down your window and listen for other vehicles, and consider using your horn.

It is with great sadness that I have to report that Neil Hamilton has sadly died as a result of injuries sustained in a Road Traffic Collision recently. Neil joined our group last year as a diploma holder and became one of our Advanced motorcycle tutors.

I first met Neil last year and I was struck by his enthusiasm for all things motorcycle related but he had a passion for Rider Safety that shone like a beacon.  He was a very experienced and highly qualified rider which I found out when I rode with him.

He was starting to become heavily involved in group activities and I looked forward to Neil's group involvement in 2013, he did have one or two initiatives he mentioned to me and wanted to pursue this year for the benefit of the group no doubt based around his 'training stories'

Unfortunately we as a group will not benefit from Neil's input now.

Cleveland RoADAR Group would like to extend our deepest sympathies to Neil's family and friends.

He will be sadly missed.