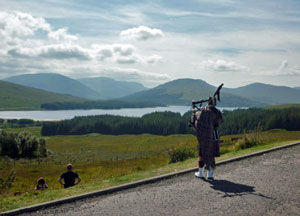 A few months ago it was mentioned by our Chairman that a group ride should be organised and we could have a few days away up North, and then he promptly disappeared overseas for a couple of months and delegated the organisation to our esteemed event’s organiser.

And so it came to pass that on Friday 10th August the intrepid explorers met at Morton Park in brilliant warm sunshine, surely that couldn't last bearing in mind we were going to Scotland could it, We had Derrick on his Triumph Explorer, Pete on his CBF1000, Dick with his Triumph Sprint GT, Tony on his Harley Road King and me with the trusty Varadero….. and so the trip began, well not before a coffee at McDonalds. 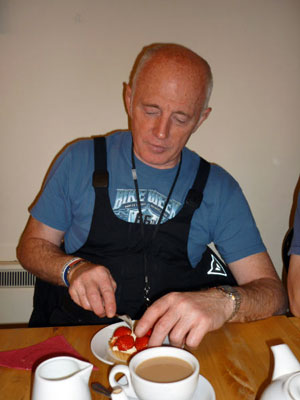 thought it would be good idea if we rigged up some radios so we could talk to each other, so Tony Derrick and myself were in contact with each other, Pete had his radio set up but then found it wouldn't talk to us and Dick with his flashy Bluetooth thing couldn't talk to anybody, as the weekend wore in I was starting to wonder whether it was a good idea after all with Victor Meldrew on the Road King behind me.

I was given the job of leading us up which was probably not the best idea as I only found out where we were actually going a couple of days earlier. So the A68 it was, I have always liked this road up to Carter Bar having done it millions of times in the past…. well not quite millions but you get the idea.

We had decided whilst having coffee at MacDonald's that we would stop again for coffee at Brigantium cafe at Rochester, this coffee stop thing did become something of a recurring theme throughout the few days almost always instigated by the elder gentleman on the Triumph Explorer.

Anyway we had a pleasant ride up to the cafe which has changed name now, I know it was only a few days ago but I've forgotten it already but anyway, still a good stop off point for a break. Whilst there a group of German bikers arrived and asked who rode the Varadero, slightly panicking thinking it had fallen over I was greeted by a big smile and thumbs up. I would just like to mention that they totally ignored our other four bikes, one up for the trusty Varadero I believe, A good start.

Amazingly it was still sunny and hot, too hot for me but the older members of our party appreciated it mentioning it was all good for their arthritis and other ailments which really have no place in this story.

Anyway off we went up to Carter Bar passing the usual throngs of tourist on the way all taking pictures of the large Rock with Scotland written on it. We turned off at this point ostensibly for a pleasant view with fantastic roads but really just to avoid them dastardly speed cameras on the run into Jedburgh, although we did find many more later on. We turned off just after Carter Bar towards Hawick, if you have never done this road then I suggest you give it a go, it's a great road usually very quiet and no cameras. Today was no exception it was almost devoid of traffic all the way into Hawick, dry tarmac, sunshine, bends and twistys and no cars… almost, can it get any better, well yes it can and did later on! 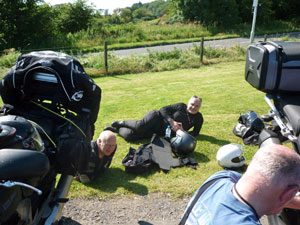 Reaching Hawick called for a fuel stop due to Pete’s tiny tank range, however his observation let him down a little here as he went tearing past the four stationery bikes parked next to a large building with fuel pumps in, not really that difficult to see!! by the way it's not really that tiny but compared to the other bikes.. it was.

We managed to stop the elderly gentleman on the explorer going for more coffee and pressed on up the Historic tourist road towards Edinburgh. I really cannot believe that one small country could have half of the entire global Tractor population but it obviously does. I was almost feeling really sorry for all the car divers stuck in their tin boxes in this heat and in the traffic flow, I say almost!

It was good overtaking practice though.

I thought we couldn't get any more heavy traffic like that and that proved right for a while until we reached the Edinburgh By Pass towards the Forth Bridge, not quite the M25 though, more like it's annoying little brother. Victor Meldrew on the Harley did have some observations on this subject which he kindly shared over the radio but I really can't censor them enough to print them.

Anyway it was about this time, the elderly gentleman on the Explorer shouted me on the radio, surprisingly not for a coffee stop this time but he had decided I didn't know where we were going , which to be fair to him, was right and thought it best he lead us to the digs as he had been there many times and knew the route like the back of his hand………………… you can guess what happened cant you!!!

It was always doomed to failure when he suggested shortly afterwards, amazingly, that we get off this motorway and find…………….. yes you guessed it, a coffee stop! Allowing the only man with a phobia of technology hence no Sat Nav to lead the ride into uncharted territory was a gamble but luckily for the elderly man with the Explorer a gamble that eventually paid off, after what seemed like an eternity we eventually found the Powmill Milk Bar and Garden Centre which in all honesty was great. Don’t ask me where it was though as I have no idea, I just know it was surrounded by fields and not too far away from Knockhill race track as I remember passing that at some point.

After some well earned sunbathing lounging on the grass and fluid intake we set off again to our Digs in Stanley, just outside Perth which was owned by a friend of our elderly gentleman with the Explorer and it was outstanding and thoroughly recommended with enough food to satisfy a starving man or woman.

After a shower and a great evening meal we decided to go out on the town, I use the word town in this context very loosely, if you are looking for a hedonistic nightlife then you may be disappointed but as we are all on the mature side, well most of us, it was great. Now it may be worth mentioning here that I do not drink and have an avid interest in History and when mine host Dave mentioned that there was an historic Mill in Stanley I had to go, sadly I was outnumbered and the pub called. After my Coke we did go for a wander around the locality and ended up at the Mill which I thought was great and spent some time looking around, after about 20 minutes I realised I was on my own and the group were walking up the hill away back to the pub, just no sense of our cultural history at all, but I thought never mind there's loads of castles in Scotland I'll go and visit some of them instead. (Remember that sentence for later)

The next morning we had a huge and I really do mean huge breakfast. Yes I know that a fried breakfast is not the best way to start a longish riding day but it really just had to be done.

It had been decided earlier that each riding day should have a different leader, I rode us up yesterday and today was the turn of Victor Meldrew on his Harley. Now Victor did have a Sat Nav on his Harley so I was confident that this time we would get to where we wanted to be unlike yesterday’s episode with the elderly gentleman with the Explorer. 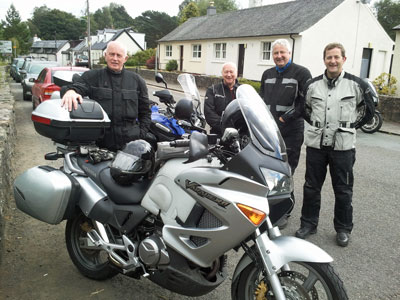 ow wrong can you be!

We set off from Stanley in great weather and it just got hotter throughout the day, the plan was to go up to Tyndrum for coffee then onto Glen Coe and Fort William for more coffee and the Spean Bridge to pay our respects at the Commando Memorial.

And we stuck to that plan with the exception of a not so small detour which took us through what can only best be described as a single lane cattle track with grass in the middle which meandered through a forest by the side of a lake. Now having the only bike there with a slight nod of the head to off road pretensions I was fine and absolutely loved the road, the squishy suspension just soaked every bump up and rode brilliantly. Victors Harley was not so good, these roads are definitely not Harley Territory. The even older man on the CBF1000 declared it fun and Yorkshire Dick was also fine, surprisingly the elder man on the Explorer was not so fine mumbling something about the suspension and needing a coffee.

Fortunately for them the cattle track only lasted for 22 miles!!

Ah well, two up for the Varadero and did you notice on the left how they all wanted their picture taken with the Varadero.

We eventually found civilisation again and stopped for a break by the river and a photo opportunity. I knew we must be on great roads judging by the number of bikes coming by and waving and I was looking forward to setting off and no doubt getting lost again.

After a brief stop, off we went again with Victor leading, the road was brilliant and had me longing for my GSXR, it would have been superb but obviously would have necessitated a stop off at the chiropractor before we got back to the digs, the elderly man on the explorer would have been happy though as he could have had a coffee.

Tyndrum soon arrived and it looked like the car park of the Pitstop on a Tuesday night, there were bikes everywhere. After a brief wander around looking at all the shiny things we went in search of the elderly man with the explorer, I bet you can't guess where he was. 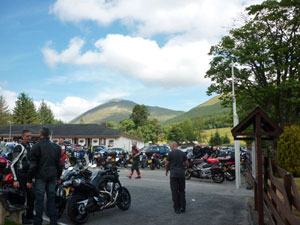 After the coffee break, off we went again passing some lovely castles… and that was as close as I got to them, they wouldn't let me stop, it then became a sore point when every time we passed one I was reminded over the radio by Victor on the Harley kindly informing me "Look Steve there's a castle"

We eventually made Fort William for our lunch stop or in the elderly gentleman's with the explorers case coffee and cakes… yes that's plural.

After a refuel we pressed on up to Spean Bridge and the Commando memorial, it's been a few years since I was last here, well almost 30 to be accurate and it didn't look like I remember. It was beautifully set out and was very poignant, I had to take the time to read all the memorials and it really put things into perspective.

After this stop it was off back to Perth

The day ended with a huge evening meal back at the digs, so we settled down with a few beers, or they all did anyway, I had a bottle of coke to myself and then Dick spent the evening regaling us all of tales from back in the day on the beat in North Yorkshire, oh and how Yorkshire had achieved more gold medals at the Olympics than Australia and they had!! 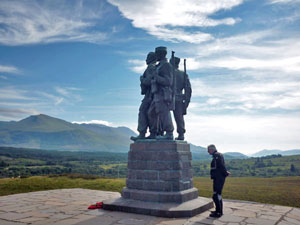